Anchor Down 6 hour (non) Ultra (or how to get your ass handed to you by a 2.5 mile course) 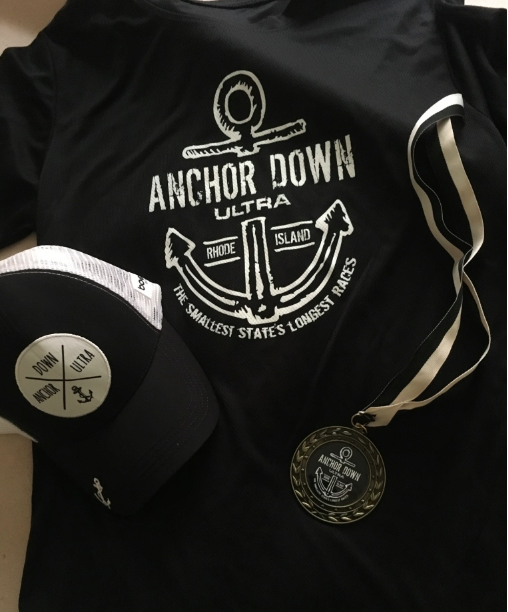 Anchor Down Ultra 6 hour. I showed up to the 2nd running of this race ready to rock a 50k. I figured if I could do a more technical 50k in 6:10, I should easily be able to knock out 31 miles of the relatively flat, partially paved course that winds through Colt State Park in Bristol, RI. Unfortunately that’s not how the race played out for me. Things rarely turn out as expected, but most of the time something more magical happens…

The plan was for myself and my friends Elise, Mallory, and Wendy (my pacer from VT) to run the 6-hour, and my friend Eric to run the 24. Elise and Wendy were trying for their first 50k, Mallory was going for as many miles as she could get, and Eric wanted 100 miles. Yep, we are all a bit crazy – but that’s why we make such a good group (birds of a feather, you know). Elise’s mom and sister were acting as our crew and cheering section (a repeat of last year’s event). Of course the old adage about the best-laid plans never crossed our minds, so we charged blissfully ignorant, but thoroughly excited, into the abyss.

The week leading up to the race was spent obsessing about the weather, shopping for aid station food, and packing gear. Mother Nature’s predictions hovered between seasonally hot and humid and mildly cooler with a chance of showers. Personally, I’d rather have the showers. But since the 6-hour race starts at 7pm, I really didn’t mind what the weather turned out to be. I did have plans to pace Eric in the 24-hour race the next day, so I still hoped for the cooler option. I was again unfortunately disappointed.

My husband Joe was registered for the 6-hour as well, but has been unable to run since February. He chose to attempt to walk a marathon in the time limit. I know it was difficult for him to watch me run off the start line while he was reduced to walking, but I felt his support and encouragement follow me as I disappeared down the trail. The first few laps of the 2.5-mile course literally flew by. I by-passed the mid-point aid station but chowed down at the start/finish area. We had brought the goodies that had served me well at the VT100k – pickles, chocolate chip cookies, V8, and Coke. The race aid station also had PB&J and salted potatoes, so I was well-fed on each lap.

By lap two or three the sun had gone down, so it was a bit cooler. The course is just gorgeous. The first mile or so is in the woods and consists of very non-technical trail with one small hill. Then you come out along the paved bike path that follows the shore of Narragansett Bay for the next mile. The last ½ mile is bordered on one side by waving grasses and a little cove. As you can imagine, it’s quite peaceful and serene after dark. By this time the field is well spread out so you are sometimes running with nothing but your own thoughts. My dad has passed away a week earlier, so he was often on my mind. As a matter of fact, I wore his Masonic ring on a chain around my neck – although I didn’t need this reminder to know he was with me the whole time.

I was chugging along quite peacefully for a few hours. Then the fatigue started to set it. It really had been quite an emotional week, with little sleep, and I knew I wasn’t fully recovered from Vermont. The laps now consisted of walking the (small) hill on the trail while running the rest of the loop. I was still eating and drinking well, and I even passed Joe and got a hug. Elise’s mom said everyone looked good as they came through, except that Eric was having some GI issues. Ugh, not what one wants at the virtual beginning of a 24-hour race.

Somewhere around mile 17 I saw Mallory at the aid station, not looking very good. She wasn’t feeling well and no amount of cajoling was getting her to eat anything, but she didn’t want to quit. We left the aid station together and I told her I would stay with her and get her to her goal of 23 miles. Halfway through the loop she felt better and wanted to run but I was gassed so kept walking, thinking she would wait for me at the aid station. When I arrived, I was greeted by Wendy who had fallen off her pace and was now on the same lap as I was. She told me that Mallory had just departed, so after I got some food we set off in hot pursuit.

We walked the trail section, as neither one of us had much energy at this point. We popped out on the paved section and could see Mallory’s blinking red light about a tenth of a mile ahead of us. Convinced we could catch her, we flew (ok, it felt like we flew) through the next mile without overtaking her. Just as we arrived at the aid station, we saw her heading out. Checking our watches, we realized we were running about a 9:30 pace on that paved section, so apparently Mallory was feeling better! Joe had dropped at the 20 mile mark, so now my race became getting the marathon distance for him, as I knew the 50k was out of reach.

The next two laps went exactly the same way: walk the trail section, and run the paved section in small bites. Run to the ½ point aid station, walk a minute; run to the road crossing, walk a minute; run to the start/finish aid station, get some food. We headed out one more time, knowing we only had 45 minutes to complete the lap in order to get credit for it. I got that burst of energy that happens when I know I’m almost done, so I was pretty confident that we’d finish in time. Well, that energy only lasted for half the lap, and with a mile to go I was worried that we wouldn’t make it. I pushed hard for that last mile and tried to ignore all the check engine lights that were coming on. It was no longer about me; it was about doing something for someone else. I needed to get that marathon for Joe. The physical stress transformed into emotional breakdown, and poor Wendy had to deal with a blubbering runner as we came into the finish line. We finished in 5:48, with way more time to spare than I had anticipated.

Another race done. I was disappointed that I hadn’t gotten the 50k mark. Elise, however, was about to get hers. Wendy and I had crossed the finish line and then hung around to watch Elise come in to complete her first 50k in 5:50. Even though I was tired and hungry, I stayed at the finish line to cheer her on for this amazing accomplishment. We 6-hour racers were done, but somewhere out in the dark Eric was still marching along towards his 24-hour finish. Since I had offered to run some miles with him, it was time for me to get some food and try to get some rest.

After napping off and on for 5 or 6 hours, I gave up on getting some real sleep and gave in to the desire for coffee. Hobbling from the tent back down to the start/finish area, I was amazed at how good some of the 24-hour runners still looked. Clearly they were in a completely different athletic universe than I was!! We made coffee and breakfast and sat down trailside to wait for Eric and assess his condition. He arrived a little while later looking not bad, but still unable to get the GI issues under control. He had now decided that 100 miles was not going to happen, so the new plan was to complete 100k and call it a day. It would be his first 100k so I knew this was a huge accomplishment and not a defeat in any way. I told him I’d join him in a few hours and we’d get the job done.

As I headed back to the tent to change into my next set of running clothes and shoes, I thought to myself that I must be insane. I ran 27 miles the night before, and here I was gearing up for another 15. Only those people who run crazy distances understand the drive to do what we do. Not only did I feel incomplete without having finishing my own 50k goal, I knew that Eric would do better having some company and encouragement. So, I laced up my shoes, put on the pacer bracelet, and off we went.

Each lap we ran was the same as my final laps had been: walk the trail segment, and then run the paved segment in sections. The smaller bites were easier to digest (for both of us, I think) and it was nice to enjoy some of the scenery. Eric looked good for those last few miles, and he finished his 100k in 18:45. By this time we were both ready to chill out, slip on our Oofos, and get some real rest. Despite my failure to complete my own 50k, I had run a marathon for my husband and ran Eric to his first 100k. That was the real magic of the weekend.

Anchor Down Ultra was an amazing experience. Thank you to race director Jason Paganelli for his tireless (literally) presence throughout the entire 24 hours and for his hard work in creating a great racing atmosphere; to all the volunteers who gave up their weekend to help a bunch of crazy runners do impossible things; and especially to my husband Joe, whose continued support on this ultra journey makes it all possible.