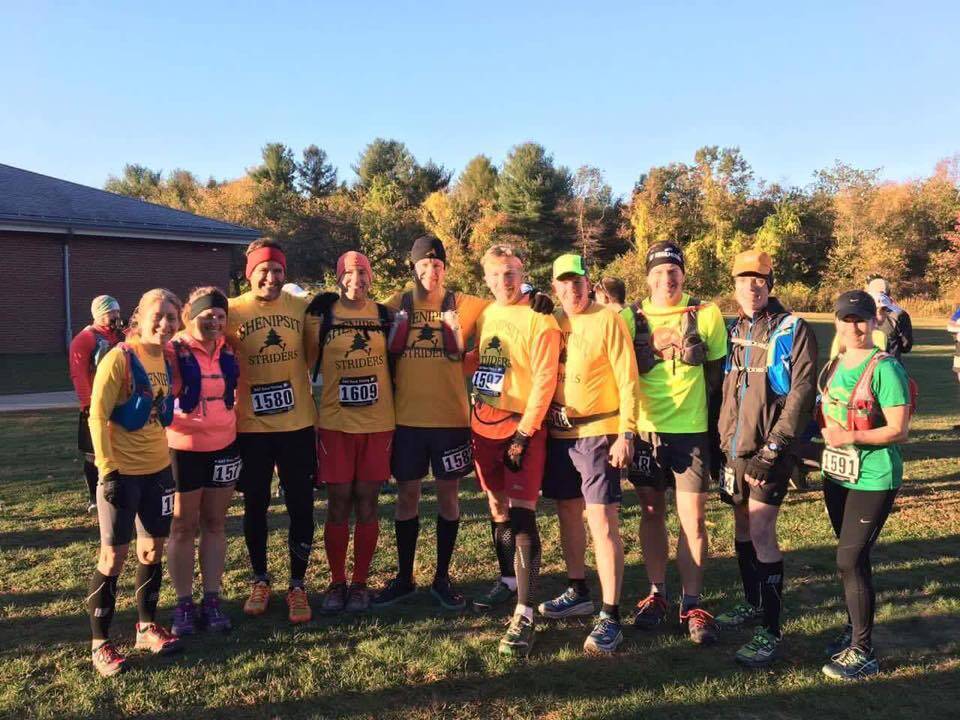 Well I certainly picked a doozy for my last big trail race of the year. Bimbler’s Bluff 50k(ish) in Guilford, CT is billed as “an off road foot race through several inter-connected woodland preserves in southern Connecticut. Consisting entirely of rolling forest roads or single track that can be extremely rocky, the course will provide a true test of the runner’s fitness and mental stamina.” It did NOT disappoint. I was feeling pretty confident in the days leading up to the race, but this course smacked me into reality.

Laura and I arrived at the venue just as the early starters were leaving the line. I almost wished I were one of them, getting an extra hour to do this reputedly tough course. But hey – how hard could it be? Some hills, some rocks, some more hills, some more rocks…bring it on. Grabbing our packets, which consisted of a bib, a car sticker (NICE!!!), and an epic race shirt, we headed back to the car to wait for our 8am start time. We high-fived fellow Striders and Trailmixers and shared well wishes with many other runners with whom we would soon be sharing an amazing journey. I love how small-town our trail running community is – everyone seemingly knows everyone and it feels like you can’t walk ten steps without hearing someone call your name and wish you good luck.

After a few pre-race announcements, the race director sent us off with a circuit around the football field, under the banner, and up the trail. The trail quickly turns to single-track and would get seriously bottlenecked without the lap around the field. I settled into a good pace, at the back of the mid-pack, and felt ready for the task at hand. After a couple of miles of gentle rolling trail with decent footing, the course crosses the road at our first checkpoint. We re-entered the woods and the next few miles are rolling single and double track with a nice stretch of gravel road. Here I fell in with another runner (Laura #2). We struck up a conversation and the trail seemed to just float on by. Up ahead of us I could see two runners that I knew, and we just kept them in sight as we motored along. At about mile 6 there was a sharp right-hand turn off the double track. All of a sudden, Laura and I were alone. I feared that the two runners ahead of us had missed the turn (which ended up being accurate). Since we were worried about the difficult trail ahead, we didn’t try to look for them and just kept pressing forward. 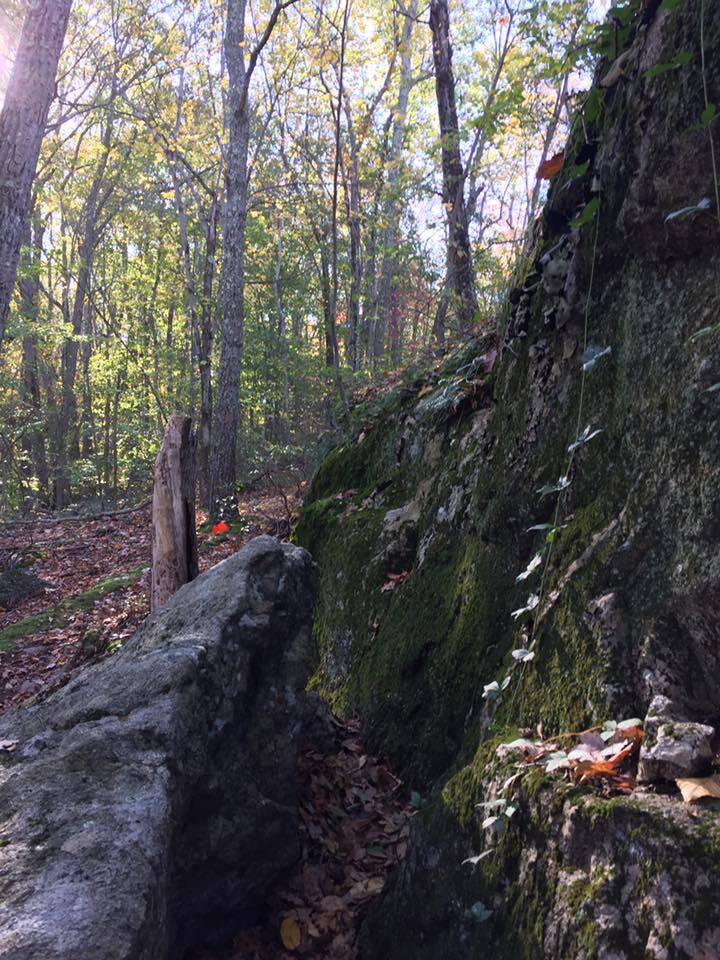 A little while later we came upon a group of runners and fell in with them. We climbed the false summit just prior to the Bluff Head climb and dropped down to the mile 11 aid station. These were tough miles, making our way around rocks, navigating tricky footing, and climbing steep ascents and descents. Little did we know that the fun was just beginning. After loading up on goodies and fluids at the aid station, we began the REAL climb – a 20 to 40 degree incline that goes straight up to Bluff Head. I remarked to Laura that Mt Greylock is similar to this – for the whole first 3 miles. I kept that in my head as we climbed – at least this one was only about a half mile. Breathing heavily at the top, we stopped briefly to take in the view, not realizing that this WAS the Bluff, and then pressed on. When we figured out that that was the top, Laura went back and snapped a quick few photos and then quickly caught back up with me. 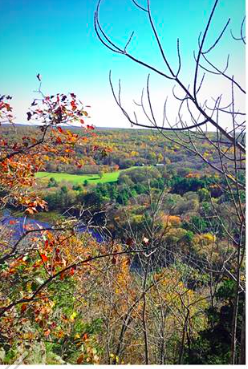 The next few miles were on trails littered with baseball sized rocks covered in a carpet of leaves. Treacherous running for someone who has just climbed up what felt like the equivalent of Mt Everest. We did a LOT of walking through this section. It was frustrating, as we didn’t want to spend so much time not running, but we weren’t willing to risk injury in this remote section of trail. Running when we could and walking when we had to, we navigated this super-technical section as quickly as we dared. The trail turned to easier footing and a lot of downhill, so we made up a bit of time and even caught up to my friend David. We three ran the next few miles together, and soon we popped out on a dirt road by the horse farm that we could see from the top of the Bluff. It had taken us a couple of hours to get somewhere that would have taken 5 minutes as the crow flies. But since I hadn’t packed my parachute, the trail had to do. 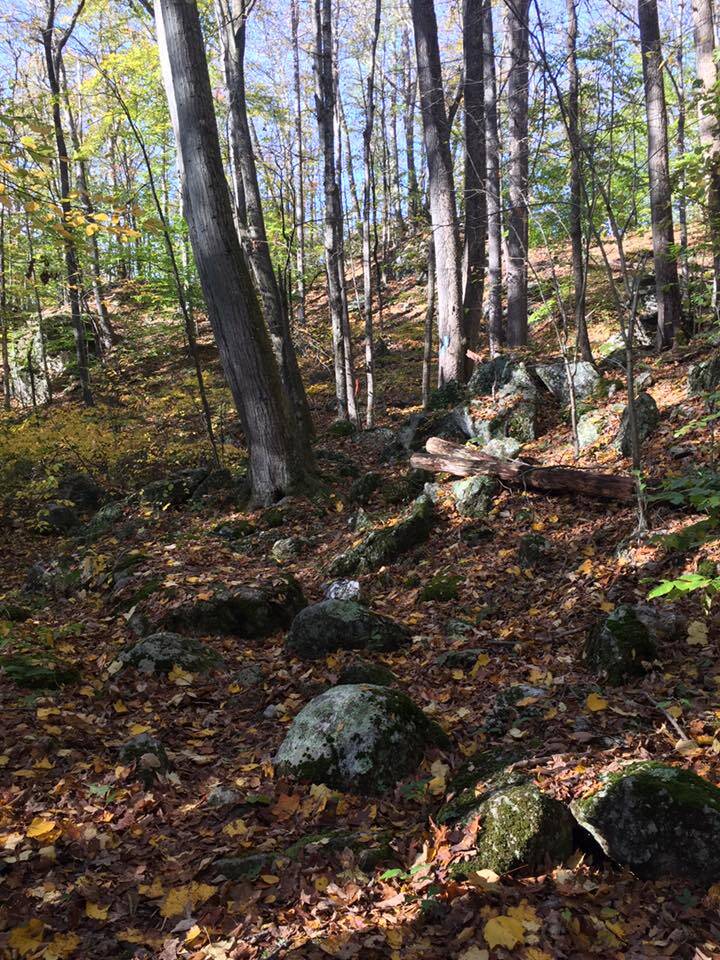 Crossing through more woods, we eventually came out on the pavement about a quarter mile from the mile 16 aid station. Oh my god, did it feel good to stretch out my legs!! I managed an 8:30 pace for that short quarter mile, but it did wonders for my psyche and my body. Again loading up on goodies and fluids, we were about to set off for the next section when David stopped and started stretching out a leg. I offered him some salt tabs, which he took, and we left the aid station at a walk. We crossed what should be a bog (but dry because of the drought) on some boardwalks and then the trail quickly turned steep again. Ugh, another nasty climb. Time to grit the teeth and just get it done.

Somewhere in the next few miles I dropped Laura and David and was running alone. I just kept plugging forward. The technical trail and steep climbs were taking their toll, but I was determined to finish in under 8 hours. I passed other runners, and other runners passed me. We exchanged a few words of encouragement to each other and kept plodding along. More rocks, a few more small hills, and then more rocks. I knew that eventually we’d be back on the trail home, and that section included the few miles of gravel road and a few miles of double-track. I kept dreaming of that section as I was getting very leg-weary and was beginning to fear a fall. Soon I passed a pond and a fellow runner assured me that the next aid station was just around the pond. Thank goodness he was right, because I had been seriously lacking in taking care of myself and desperately needed food.

Rolling into the mile 22 aid station was like striding up to a buffet. It was loaded with all the possible goodies a trail runner could want, and the volunteers stepped up their game by offering us homemade chicken soup. I can’t even begin to tell you how good that tasted!!! I chugged down a cup of orange soda, a cup of water, and then a cup of soup and grabbed some cookies and a half a banana for the road. The volunteers told us that it was a good eight miles till the final aid station, so I made sure I had plenty of water and stuffed a couple of bags of M&Ms in my pack. I headed back out on the final section, which included the much-needed double track and gravel road. 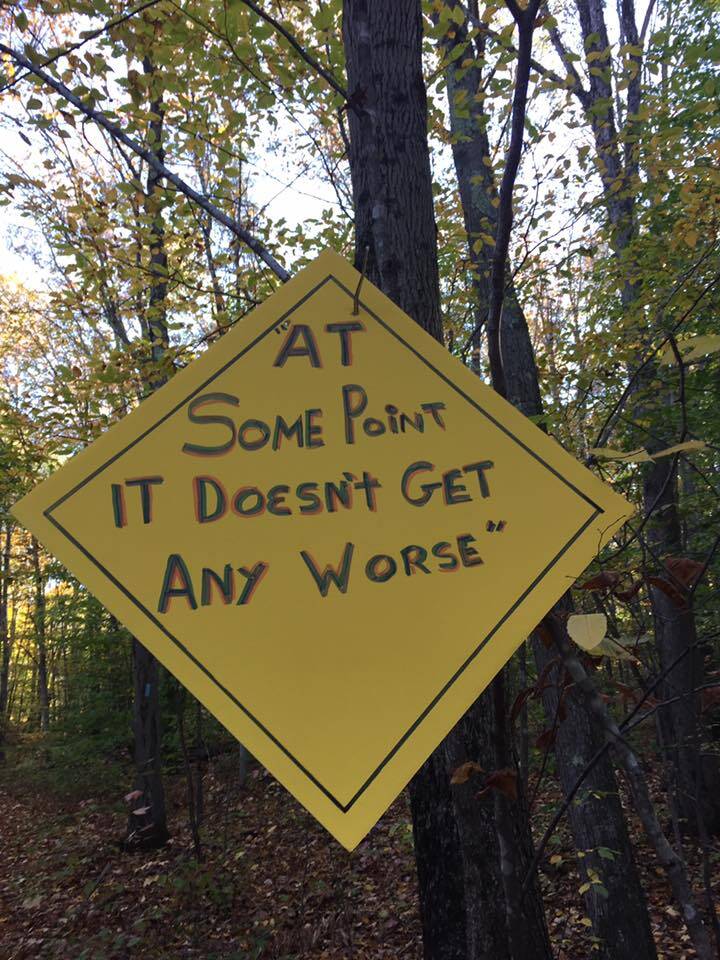 The eight miles to the next aid station seemed to take forever. I flew down the gravel road, the double track, and the easier footing single-track. The technical parts of the trail were really beginning to trip me up, literally. I prayed that I would get to the finish line without falling. Twice in this section I saved a fellow runner from missing a turn, and was glad he was within shouting distance as it would have been soul-crushing to get lost at this stage of the game. I also came upon a couple of runners who had been lost several times and were almost out of water. This section really took its toll on everyone. Tired and ready for the torture to be over, we commiserated for a few minutes before they headed off down the trail at a much quicker pace than I could sustain at that point.

Finally the mile 30 aid station came into view. I got my bottles filled, had some soda and cookies, and texted my husband that I had 2.5 miles left to go and that I was wrecked. That was an understatement. I was also worried about Laura #1, as I had no idea where she was or whether she would finish the race under the time limit. Turns out she had dropped at mile 17, after seeing that second heinous climb. I felt bad. No one likes to drop out of a race, but considering how she’d been feeling I think she made a smart decision.

I think this was the lowest point in the race for me. I had been running alone for most of 10 miles. I was getting very tired, I was dehydrated and way under on my nutrition, and I knew I still had 2.5 miles of rolling terrain left to get through. All I could think about was moving forward, and I had been very reluctant to stop and get food out of my pack. I was now paying the price for that foolish decision. This last section saw a few tears, a few tantrums (thank god I was alone) and a lot of bad, bad words. Every time I thought I was done and the finish line was just around the corner, I was wrong. I don’t think two and a half miles had ever felt so far in my life. Finally, after what seemed like hours since I left the last aid station, I started to hear the finish line. As I began the final descent, I thanked the universe for getting me to the end safely and I couldn’t wait to see my husband. I hadn’t looked at my watch in a while because I knew I wasn’t going to get my goal of 8 hours, so I was surprised when I rounded the last corner and saw 8:16 on the clock. Not bad considering I’d been ready to call at a cab from that last aid station. 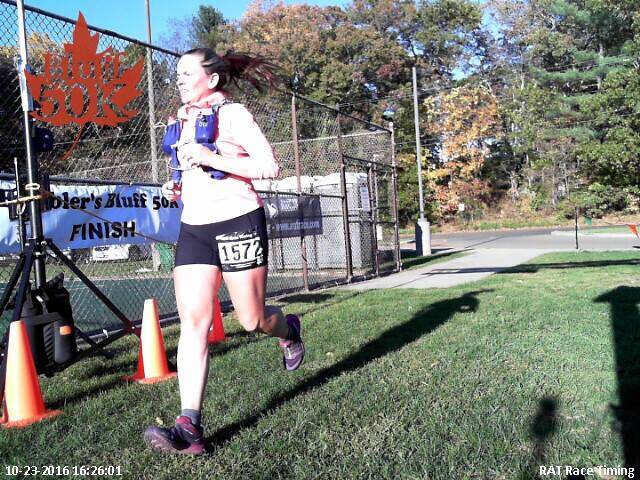 Overall, it had been a pretty spectacular day. The weather was gorgeous; the woods smelled like pine and fallen leaves, and I’d had wonderful company for most of the race. And the pint glass and beanie I got at the finish line were a sweet addition to my pile of swag. To all the volunteers who were out there for 10+ hours taking care of us and feeding us amazing goodies, to race director Jerry Turk who arranged a challenging trail for us to negotiate, and to Laura, David, and all the other runners I shared the trail with, I thank you from the bottom of my heart. A special thanks to Deb Livingston for her wisdom and coaching this past year – you made this an epic season!!!  And as always, I couldn’t have done this without the never-ending support and love I get from my amazing husband Joe. Its been a great year, and it was fun to end the season with the toughest of races!!! 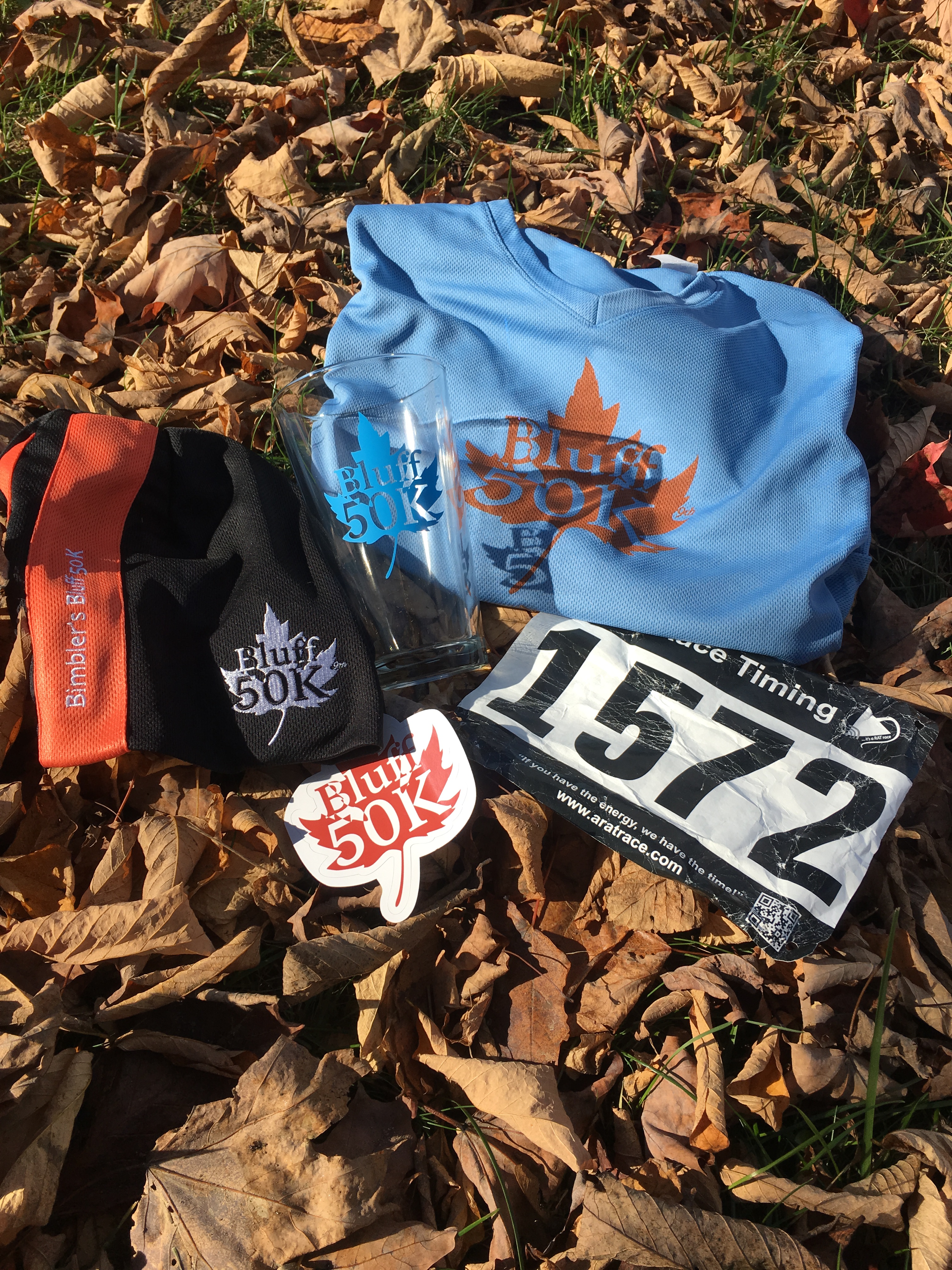