TARC Summer Classic (or my version of the Amazing Race)

“Keep close to Nature’s heart…and break clear away, once in a while, and climb a mountain or spend a week in the woods.  Wash your spirit clean.” ~ John Muir

The Trail Animals Running Club Summer Classic was held in Medfield, MA on August 12, 2017. I had signed up for the 50k as a way to get in a long supported training run in preparation for my first 100 miler (Ghost Train!!) and see some new trails. My longtime training partner Laura had originally signed up for the 40M but I convinced her to drop to the 50k so we could run it together and enjoy the trail. Misery loves company, right? 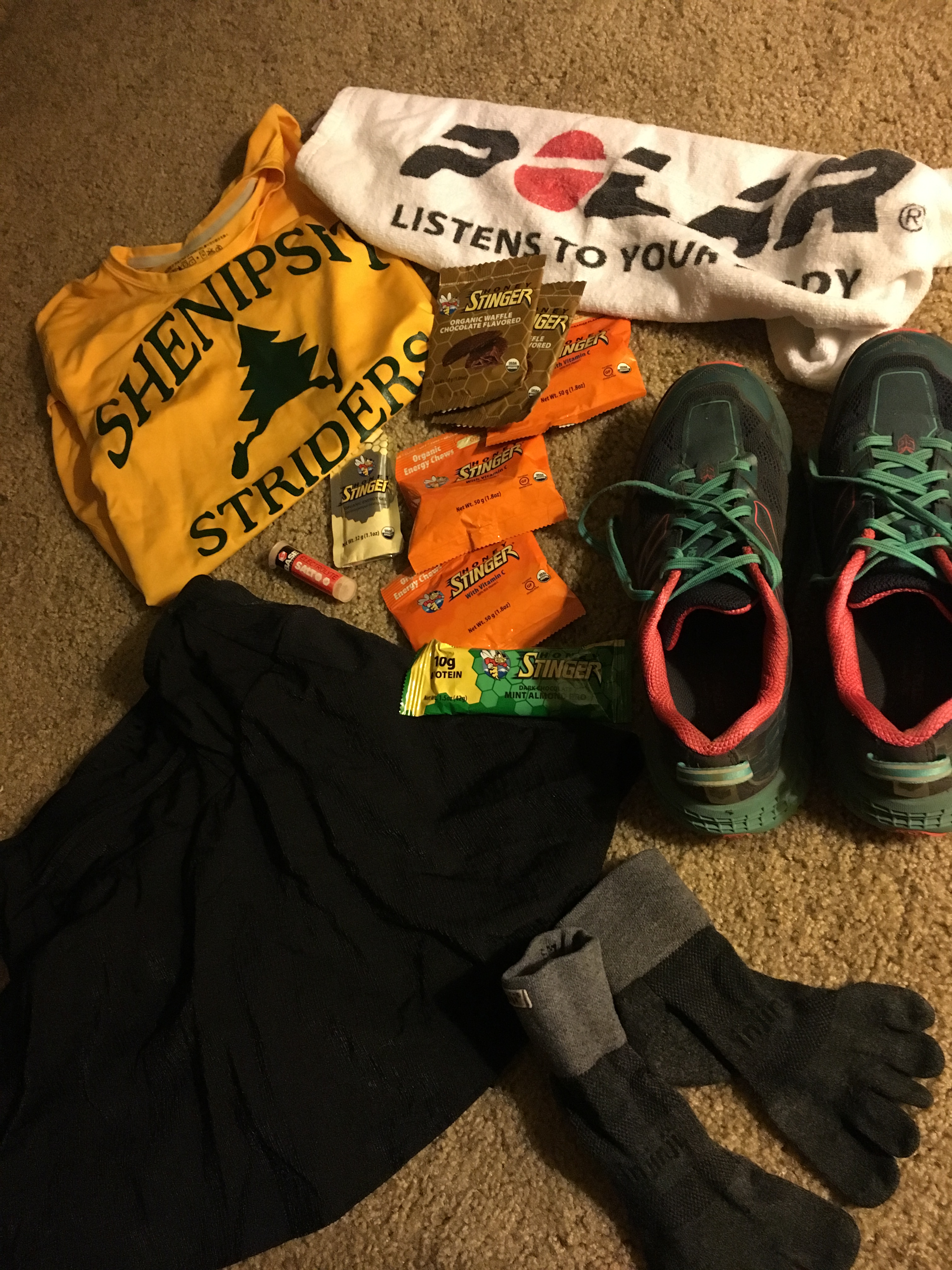 The weather stalking began earlier in the week and it looked like we were in for a wet run. Fine with me, as this would cut down on the heat and the bugs. We knew that this race has had some issues with bees and I was not interested in dealing with bee stings during a long day (not to mention that Laura is allergic). As the week progressed, the weather forecast didn’t change so we felt confident that this would not be a problem.

Laura and I, along with our friend Caitlin, arrived at our host Eric’s house Friday night. Seemed like a good plan, considering he lived the closest to the race venue. After a dinner of Subway grinders (yes I know, not the healthiest but it was easy and seriously – who wants to cook the night before an ultra??) and watching the end of an awesome classic movie, Eric headed to bed and left us girls to hold court in the living room. It was like a high school slumber party. Probably not the best idea before running 31 miles, but it was so much fun. I highly recommend it.

The alarm went off way too early on Saturday morning, giving us girls only about 3 hours of sleep. After coffee and a small breakfast we headed off to Medfield in the rain. Shortly after arriving at the race venue the rain stopped and we were able to get our drop bags ready and to the start line while staying fairly dry. After a quick briefing by RD Jeff Dixon, we were off like a herd of turtles, ready for the day.

The plan was to run very easy for the whole 31 miles, and we stuck to it right from the beginning. When we stopped to walk the first hill, we had to move aside to let a group of runners go by and we learned that two of those runners were doing their first trail race. They had registered not realized that the 50k was trail, not road. Oh boy, I thought. They are in for a tough day. We continued with our run/walk pattern, keeping the heart rate way down, and just enjoying being together in the woods.

We were part way through the first of three ten-mile laps when I spotted something up the trail. I’m always nervous in the woods, especially these days with all the bear and coyote sightings. Hoping it was nothing we slowed down but continued at an easy jog. As we got closer I realized we were blessed with a once in a lifetime experience. A rare sighting of a legend. I managed to get a quick picture before he darted back off down the trail. 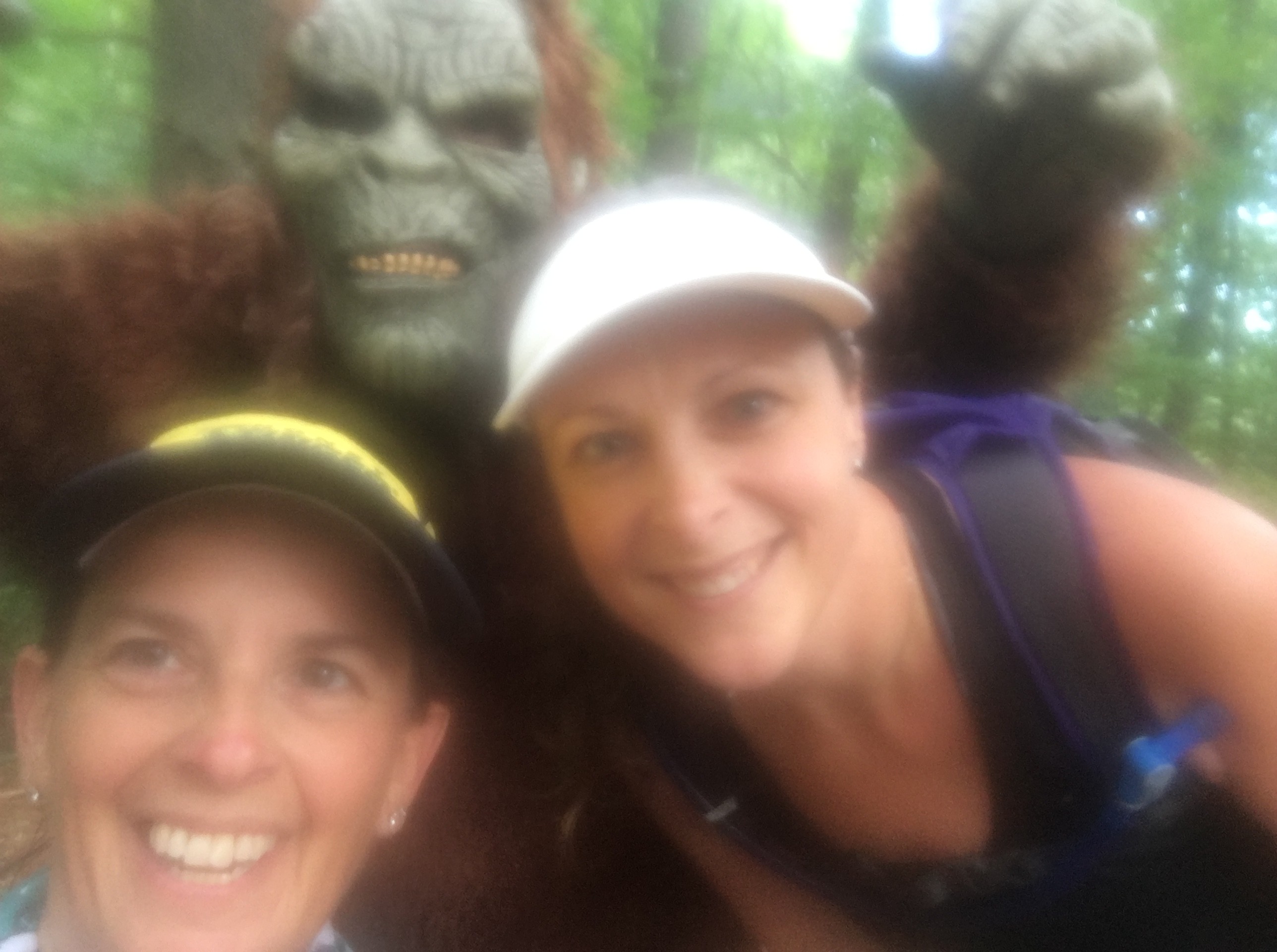 We finished the first loop in 2:50. Our goal was to stay under 9 hours, so this was perfect. So far, the trail had been fairly easy. A little hillier than expected, a little more technical than expected, but the challenge was fun and the trail was well marked and we were having a blast. We filled up on snacks and soda at the aid station, topped off our water, and started out on loop two.

This loop was pretty uneventful. We knew it would be the toughest one mentally so we just walked and ran and chatted about life. When we reached the lookout on this loop, there were hikers there also enjoying the view. One of them offered to take a photo of us and we quickly agreed. Preserving memories is so important to me, as we sometimes forget details during those long miles. After chatting with them for a few minutes we continued on our way, and the rest of the loop went by in a blur. 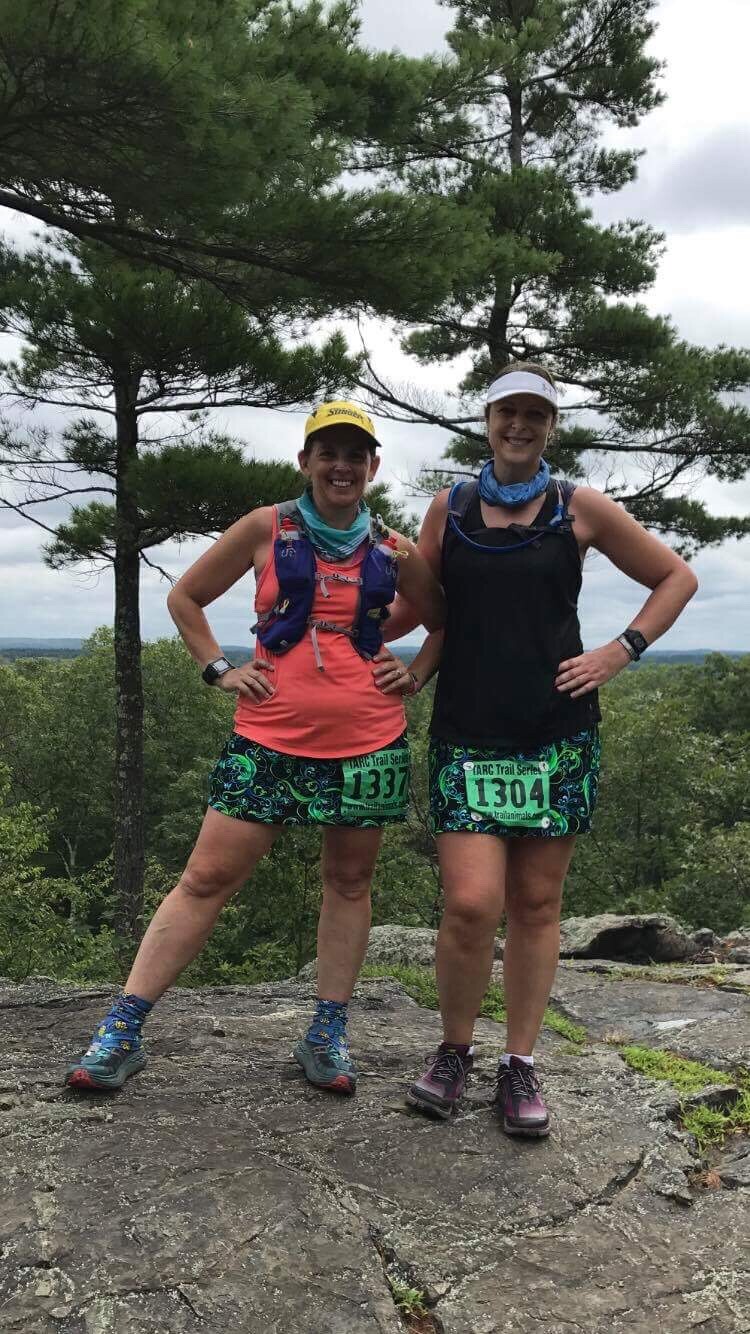 Coming in to the start/finish area for the second time was awesome. We had walked in the first time, trying to be conservative. This time we came jogging in and got a cheer from the volunteers. It’s such a lift to the spirit to hear people whistling, clapping and yelling for you. In most sporting events, only the winners get this. In running, even the final runners get the same enthusiastic greeting. Its one of the reasons I love this sport. We finished this lap in 3:02. A little bit slower than the first (which is to be expected) but still in the ballpark of consistency.

We headed out on our final lap feeling pretty good. Yes we were tired, but it was satisfying to know that we would be running the technical parts and climbing the hills for the last time that day. So far everything had gone according to our plan, which is a rare thing in ultras. We were eating well, staying hydrated, keeping the heart rate down, and had managed to stay on our feet. In this last loop I did have one slip on a wet bridge and went down, but sustained no injuries. I consider that a huge win.

A lot of the trails are two-way traffic and it was so fun to see other runners, especially the leaders, so many times during the day. Getting encouragement from those other runners (and giving it back in kind) helps to cement the trail family. We passed one girl who was having a very hard time and we spent a few minutes walking and chatting with her. As we starting running again, Laura heard her start sobbing and it broke my heart. I understand the struggle out there on the trail – I’ve been there many times.   I hoped she would pull out of her low and start to feel better.

We arrived at aid station 7 (mile 25 for us, mile 28 for the 40 milers) still feeling pretty good. By chance we got there at the same time as Caitlin and Eric and we took a few minutes to catch up and see how everyone’s races were going. At that moment, the solitary runner we had passed a mile or so back arrived, and we all cheered loudly for her. She seemed in good spirits and I hoped that we had helped her just a little. At this point the two trail virgins came into the aid station behind us. We found out that they had taken a very long rest break at the start/finish area. They looked super strong and we thought they were pretty lucky considering they’d come into an event completely unprepared for the challenge. After a few more moments of snacking and talking, Laura and I headed off in one direction and Eric and Caitlin in the other. 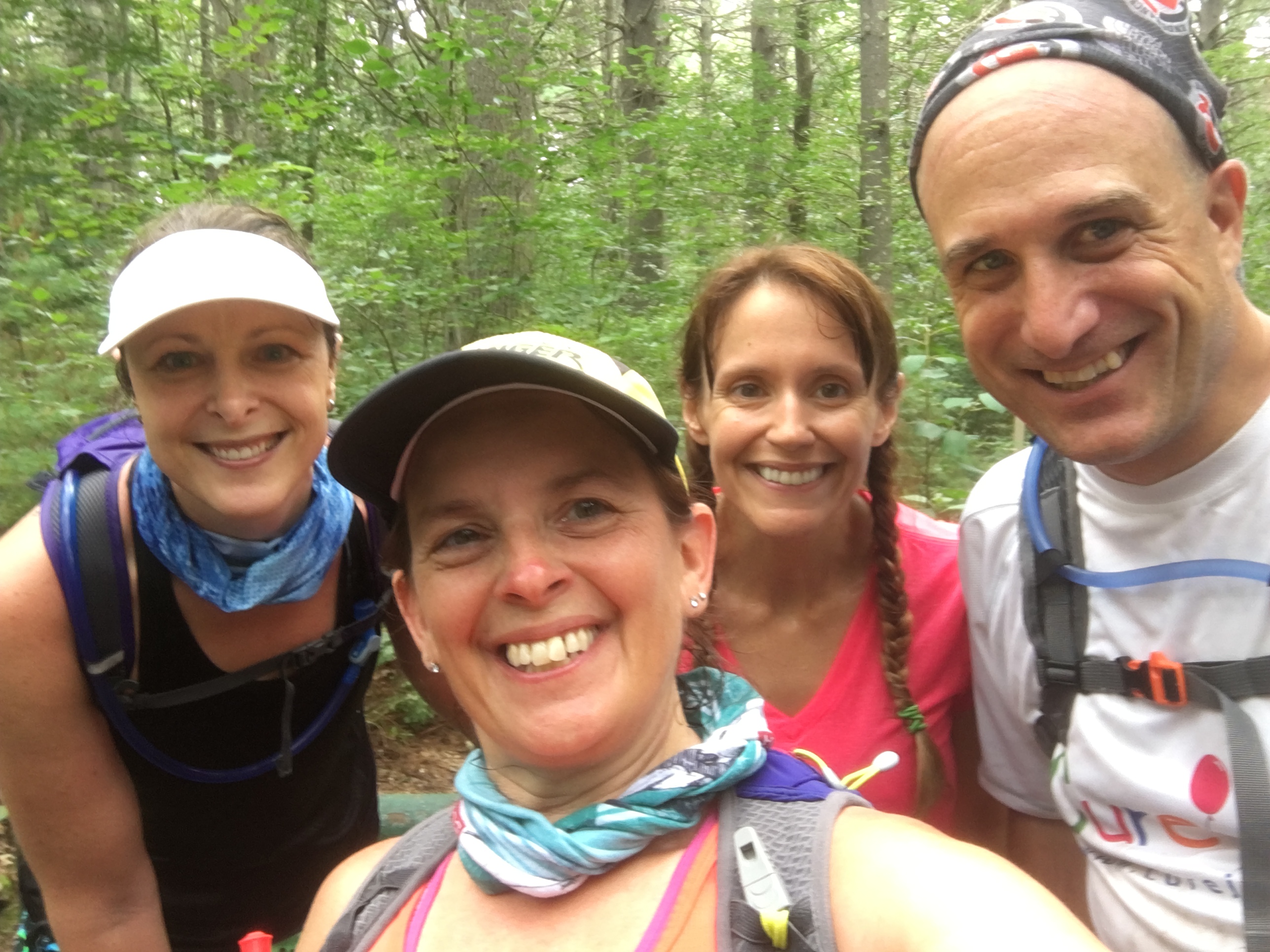 About a mile down the trail we caught back up to the two runners. They seemed to be ok despite just standing in the middle of the trail, so we kept on going. Taking advantage of the relatively flat, buffed out section, we ran as strong as we could without depleting ourselves for the final miles.

As we entered the last half-mile, we decided that we’d walk until we hit the last corner and then run the finish. We were both getting pretty fatigued and had been doing nothing more than shuffling for the last 5 or 6 miles. Somewhere during those last miles we had had a conversation about how much the brain acts as a governor, conserving your energy and giving you the impression that you are more tired than you really are. Little did we know how prophetic that conversation would be.

You can really smell the barn when you crest a steep little hill and see the algae covered pond. At this point you are about a quarter mile from the finish, and we were very eager to be there but seemingly unable to do more than a halting, staggering jog over the rocky, rooty terrain. We navigated the steep downhill and began walking around the pond and towards the finish line. A few seconds later we heard whooping from behind and we turned to see the two trail newbies, cresting that same little hill. I became a split personality in an instant. While I was so glad to see them finish and I was super happy they came through the race uninjured and looking strong, I just couldn’t let them finish ahead of us. I looked at Laura and said “oh HELL no”, and took off like I’d been shot out of a cannon with Laura hot on my heels.

When we rounded the last corner and came into sight of the finish, the volunteers went nuts. It was the fastest quarter mile of our entire race and we were just flying. After being careful all day long, and thinking we were so done-in, it felt amazing to be going that fast. We crossed the finish line in 8:56. The two trail newbies came in a few minutes after us, and we all exchanged high fives and congratulations. If it hadn’t been for their arrival at the top of that hill when they did, we wouldn’t have broken our nine-hour goal. I was glad to see them finish their first ultra, and I was glad they had gotten us to our goal, but I was especially glad because we were all still smiling. 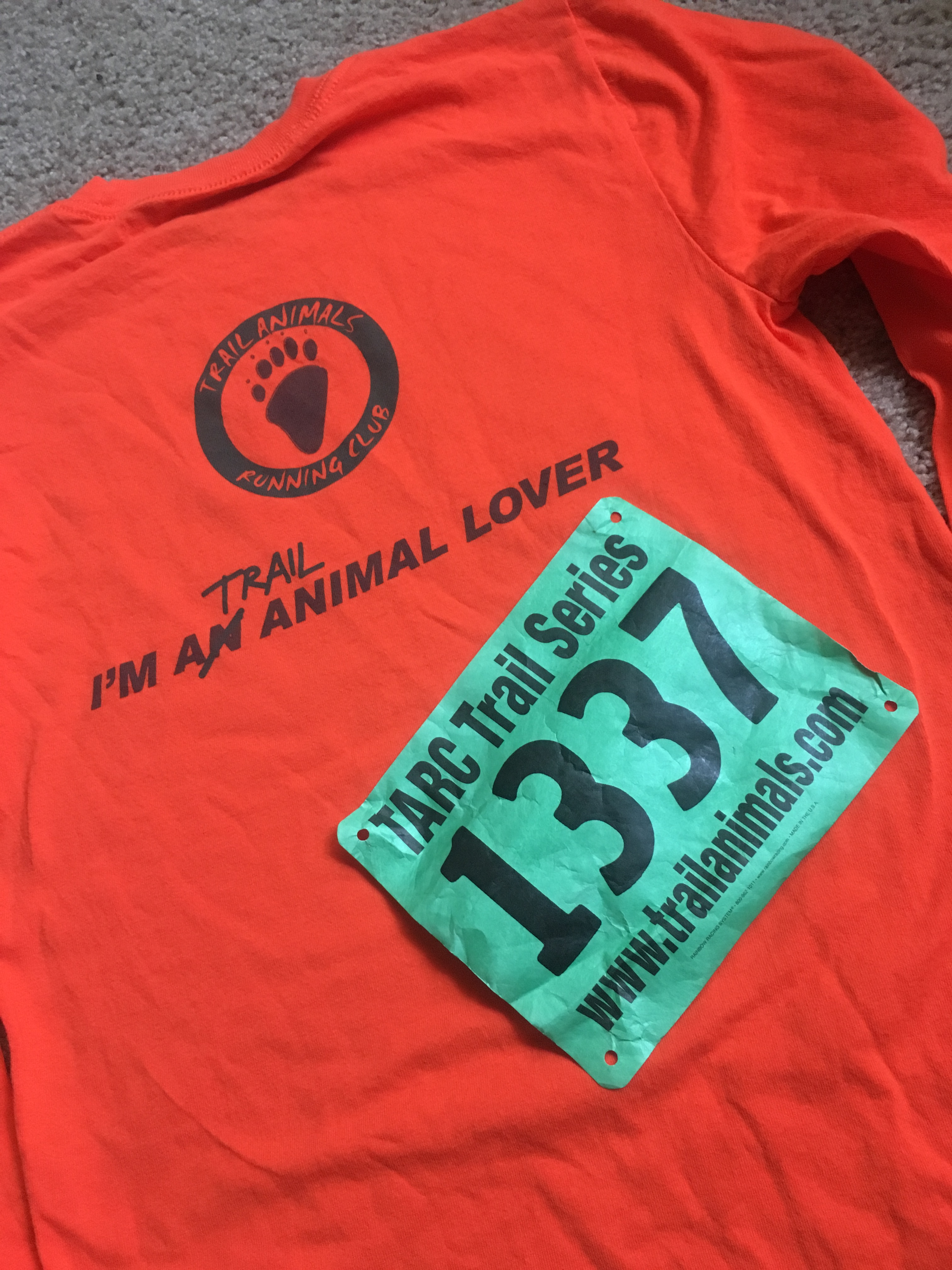 A big thank you to all the Trail Animals for putting on such a great race. What a fun group of people!!! From the race director to the aid station volunteers to the photographers out on the course, there was never a time when we were not greeted with smiles, encouragement, and laughter. I’ll be sure to be back next year, hoping for another legendary sighting.