shhhh…don’t tell my doctor I was out here!!!! 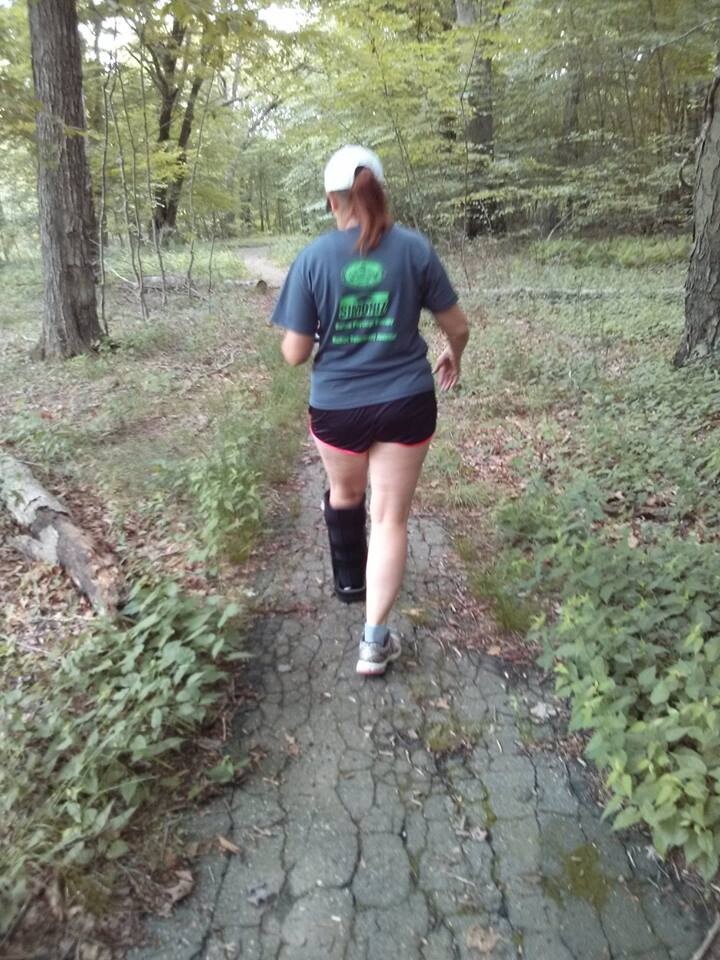 The courage to start….

“The finish line is not the end. The finish line is the beginning. Standing at the starting line gives you permission to hope. Taking the time to train, putting in the mileage, making the changes in your life, and taking the risks has given you consent to hope for the best in yourself. The miracle is not that you finished, but that you had the courage to start.’’ (John Bingham, “Marathoning for Mortals’’)

Truer words were never spoken.  After I’d breathed a big sigh of relief at the news I got from my orthopedic specialist, I realized that all the awful thoughts I’d had regarding never running again got chucked out the window.  With a boot I’d be able to work on my range of motion, do some effective icing, and get therapeutic massages from my wonderfully supportive boyfriend.  My dream of running the Hartford Marathon seemed to be intact, provided I was extremely careful in my training and had no delusions of turning in fast time.  However, for the next two weeks at least I was still grounded from doing any activities requiring walking – or was I???

I’ve never been known for being one to obey the rules.  I’d broken my wrist in February of 2012 and was told not to run until the cast came off in eight weeks.  Yeah, right.  I proceeded to run two 5k’s before my cast was three weeks old.  And years ago, I’d broken three ribs and sustained a concussion in a riding accident and was told to stay on the ground for at least six weeks.  Really?  I rode a 50 mile endurance race two weeks later.  Rules are meant to be broken, right?

In the two weeks between my first and second recheck appointments, I started walking on a local track and doing some easy trail walks with my boot on, but I rarely wore it in the house.  Stairs were a challenge, so I crawled up and down them because I couldn’t be bothered to put the dang boot on just for that.  I also started experimenting with different KT taping techniques until I found one that relieved much of the pain.  I’d used KT tape before for shin splints and had great success with it, so I had no doubt that it would be useful in supporting my weak ankle.  So far, I’d managed to find my way around being “broken’’.

Going back to work part-time in the lab raised my spirits too.  Feeling useful went a long, long way towards my mental and emotional well-being.  I honestly think that the more things I did, the more things I could do (if that makes any sense).  Every day got better and brighter, and pretty soon I’d forgotten that I’d ever had those dark days in the beginning.  But Hartford was looming ever closer and since I still really WAS broken, I had lingering doubts about actually being able to complete it.